While Pollock, Louisiana might not resonate with folks from nearby or outlying states as much as the characteristic jazz music and Cajun-inspired cuisine of New Orleans or the famed bayous around the eastern banks of the Mississippi River around Baton Rouge, it is a quaint location that has been experiencing residential and business growth in recent years. Pollock, located in the Grant Parish, Louisiana area, was recently the subject of a successful polyurea project involving the restoration of a potable water tank.

The tank had not been drained for decades and had sustained structural damage on its exterior in the way of rust and numerous voids that gave way to leaks.

Although the water supply had not been compromised from disrepair, the state of Louisiana opted to not let matters worsen and prioritized the tank’s restoration, providing a relief budget for the project to Southwest Grant Water Systems, the local water utility.

Southwest Grant Water Systems, in turn, sought a quick and economical solution that would repair the tank instead of replacing it. The answer to that problem was – you guessed it – polyurea.

It wasn’t an immediate decision. In fact, the application of polyurea was elected after an extensive and lengthy bidding process with the Southeast Grant board. The polyurea application was deemed viable because Global Coat, a Rhino Linings Corporation applicator contractor, who explained that the material would provide a fast-curing rigid protective layer that would seal all voids on the tank, made a convincing case.

On the other hand, it was determined that the application of an epoxy coating might have proved inefficient as a long-term solution and would have entailed an excess of time with regard to manual labor.

Aside from it being Rhino Lining’s most chemical-resistant product to date, HiChem 11-70 has 50 percent elongation and complies with NSF/ANSI 61 Section 5 (2012) potable water standard.

“With polyurea, we can install a better system in half a day that will provide protection for a long period of time, instead of a system that will take double the time to install and will need constant maintenance over the years,” says Steve Doxey, president of Global Coat. “We needed to reverse the degradation that the tank had suffered and in order to do that we need to rid it from rust scales and sediments and then stop the leaking. With polyurea, we could do that at a fraction of the cost of replacement.”

Before Global Coat’s three-man crew began the application, the water in the tank was temporarily transferred to secondary tanks where it could remain for a maximum of three days, setting the precise time that the crew had to complete the application.

The crew arrived onsite driving a rig equipped with a Graco Reactor 2 E-XP2 proportioner and a Graco G-X7 plural-component spray gun. The prep work preceding the application began with a blast – literally. That is to say, the crew carefully blasted the entire 28,000-gallon tank, inside and out.

The blasting of the tank successfully removed the rust scaling and sediment residue and established a rough profile for adhesion of the polyurea coating. The crew accomplished a near-white blast cleaning to an SSPC-SP10 / NACE 2 standard, which signifies that the tank was free of all rust, scale, visible oil, grease, dust, dirt, corrosion products and other foreign matter of at least 95 percent of the area.

There was only one repercussion to this: Even though the Global Coat’s crew took extreme caution by slowing down the blasting process and making sure not to blast too close to the thin steel substrate in order to avoid blowing large holes in areas weakened by rust, the tank had nearly 100 silver dollar-sized holes once blasting was completed. Fortunately, the polyurea product that was utilized is capable of bridging and sealing any holes and gaps, making the structure – well, leakproof.

IN NEED OF A FACELIFT: The water tank had not been drained for decades and had sustained structural damage on its exterior in the way of rust and numerous voids that gave way to leak; There were roughly 100 silver-dollar sized holes in the floor and the walls of the water tank.

“It is through the process of obtaining the desired profile we want for the substrate that pinholes on the tank went from nickel-size to quarter-size,” says Doxey. “We expected that and knew it wouldn’t be an issue once the polyurea was installed.”

Since there was considerable rusting and scaling, the blasting process took nearly four hours to complete.

Then, the crew primed the interior and exterior of the tank with Rhino 1500, a water-based epoxy primer that complies with NSF/ANSI 61 Section 5 (2012) potable water standard.

The primer was applied with an airless sprayer at three mils DFT. Primer in place, it was time to get the polyurea coating application underway.

The base of the tank, which was were the majority of the voids and damage was located, was lined with approximately 80 mils DFT of HiChem 11-70. T

he rest of the tank’s interior was lined with 60 mils DFT of polyurea. Sure enough, the elongation properties of this product allowed for the voids to be bridged without a hitch.

According to Doxey, the gel time for this polyurea product was four seconds, and you can “walk on it” in a minute, which reduces the man hours implicated in the manual labor of this application.

“It’s just a thicker system – plain and simple,” says Doxey. “It is so rigid, so structural, and so strong that once we can start the build of the material it, in effect, becomes the tank.The tank itself is a host for the build of the material, so we can describe it as a new tank within the tank. The water will no longer touch the metal walls, eliminating the rusting and scaling issues of the past.”

Doxey further explained that the application of this polyurea system is equivalent to that of a low-build epoxy system in cost, yet polyurea can be applied at minimium of 40 mils DFT at once and cures fast, whereas an epoxy coating is applied at a 12 mils DFT and take time to cure.

Moreover, Doxey noted that the moisture and air permeability of polyurea is significantly lower than any other coating system, and “since those two factors are what causes corrosion, then I’d say this tank is well guarded.”

Doxey noted that this type of polyurea with a higher elongation and excellent tear, impact, and abrasion resistance was used to protect the tank from rain, hail, and any other damage derived from harsh climates.

Internal view of the roof before and after the polyurea application.

“The exterior application provided a protective layer from extreme weather conditions, and both coatings basically sandwiched the existing metal substrate together, and thus the metal itself became the host for our coatings,” reaffirmed Doxey.

Lastly, the Global Coat crew applied four mils DFT of a white Rhino UV Topcoat, a polyurethane coating specified for the protection and stability of the polyurea coating from UV damage.

Since Rhino Extreme HP 11-50 is an aromatic product and it is not color stable, the application of the white urethane coating also played an important role in maintaining the aesthetics of the tank.

Between preparation, application, and cleanup the Global Coat crew was able to complete the project and vacate the site in two days – with one day to spare from the initial timeline given. By the time the crew had left the site, the potable water tank was ready to return to service and resume operations.

“With the polyurea lining in place, the owners can expect a lifespan of at least 30 years with maintenance going down to virtually zero,” points out Doxey. “No more voids or rust scale, no more leaks or infiltration, and most importantly, the water is housed in the best possible environment.”

In the end, the town of Pollock rests easy knowing its primary water tank is now completely rehabilitated. The project itself received high praise from the town officials, including a letter of recommendation from the state’s engineering and land surveying firm endorsing Global Coat for their diligent effort in the tank restoration.

Since then, Global Coat has signed a number of additional contracts on tank repairs of this nature.

Because this was the first water tank in Louisiana to be repaired with polyurea, city districts from all over the state have begun considering its application as a suitable solution for aging tanks.

JHPK Polyurea spray machine, welcome to inquiry us if you do prefer or it is suitable for your using , kindly call us freely, 8613801200210 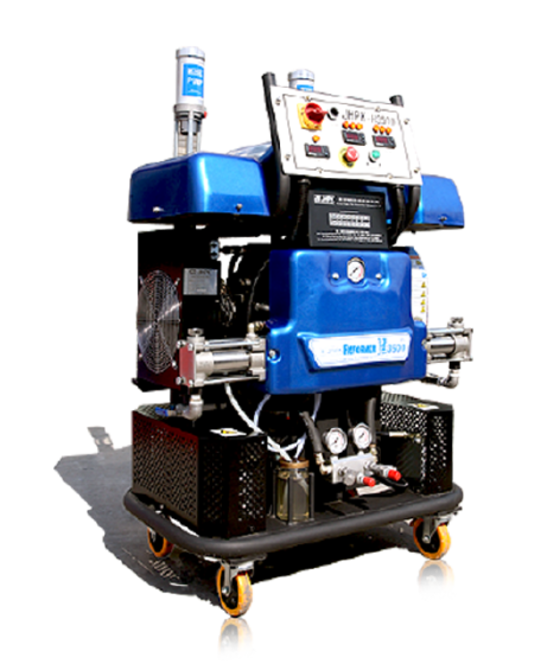 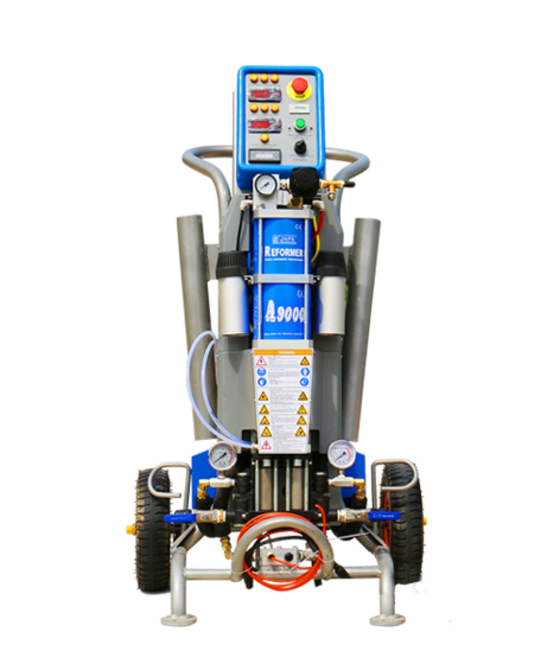 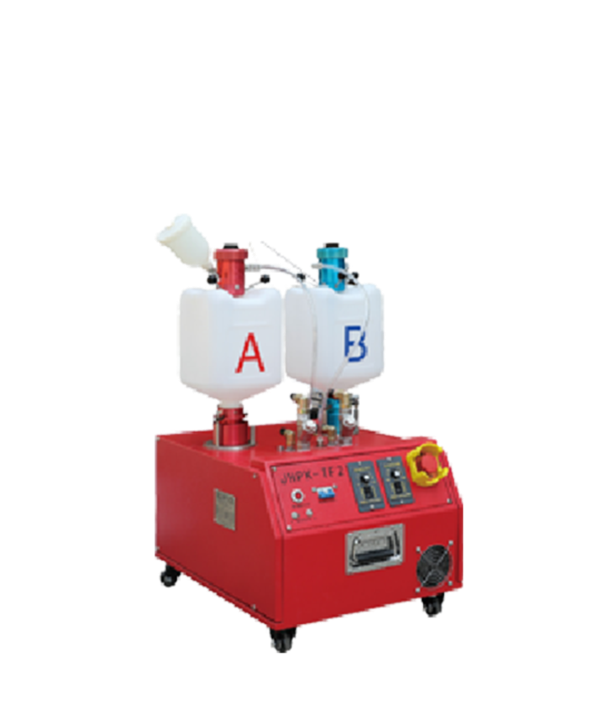 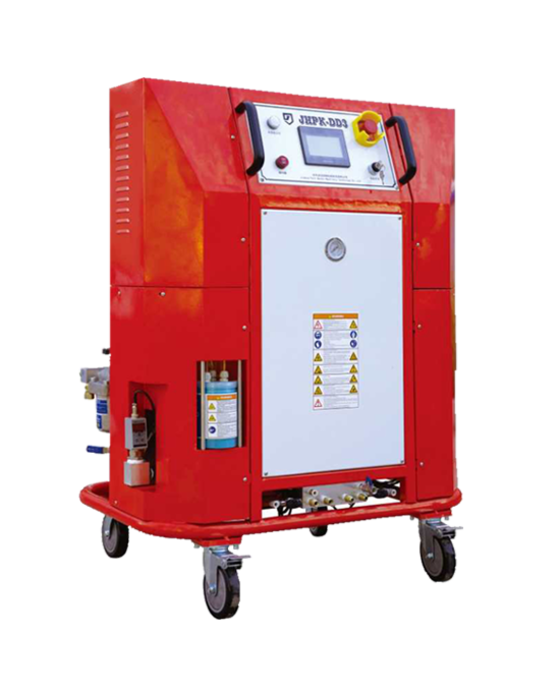